Cubs to play for provincial glory

Cubs to play for provincial glory 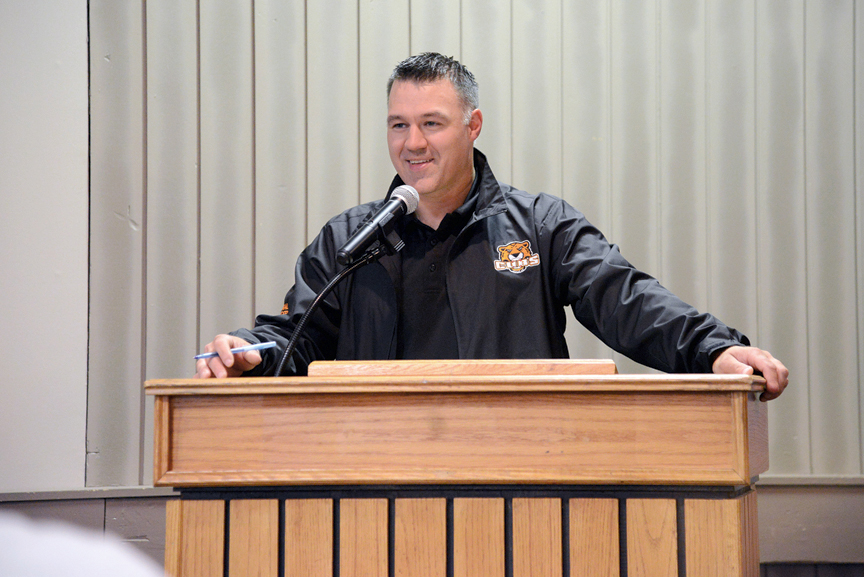 Dave Kowalchuk was all smiles when he took to the podium at HomeStay Inn and Suites Wednesday.

The Medicine Hat Cubs general manager and director of hockey operations could hardly contain his excitement as he announced the local junior B club will be playing for a ring in April as hosts of the Hockey Alberta Provincial Championship.

The right to host was initially awarded to the Blackfalds Wranglers, however the team relocated to Sylvan Lake in the off-season, which re-opened the bidding and allowed the Cubs to swoop in.

“I always had this feeling inside that we’d still get it even though Blackfalds got it,” Kowalchuk at Wednesday’s press conference. “I’m beyond excited for where we’re at and where we’re headed. It’s going to be a lot of work. There are going to be some tough nights but for the most part I think we’re set.”

Kowalchuk has been at the helm of the Cubs since early 2018, helping lead a culture shift toward a more professional and positive environment within the organization while increasing interest in the team and ramping up competition for spots on the roster. Looking back on everything, Kowalchuk says it all helped shape a better future for the team, one that includes hosting a provincial championship.

“The culture is changing. It takes time. We’re certainly going to have our ups and downs, and growing pains, but for the most part the guys see the focus. Everyone sees the road ahead,” said Kowalchulk. “Kudos to our board and our coaching staff, they’ve bought in and now the players are buying in.”

While their role as hosts means a guaranteed berth into the tournament, Cubs alternate captain Mason Fischer says the team is focused on earning their entry to the provincial stage by clinching an HJHL championship this season.

“It’s pretty important to show others we actually mean business and it’s not just a buy-in,” said Fischer, a Hatter in his final season of junior B eligibility. “Coming back and being able to play with the Cubs again and finish my career off in provincials, it’s definitely something I know myself and the other 21-year-olds are looking forward to.”

Adding to the bid, the Kinplex is undergoing finishing touches of a renovation project which City of Medicine Hat manager of recreation Dave Young says will provide an array of new features for players and fans alike.

“It involved basically replacing the boards, reconfiguring the players boxes, which we hope (the players) are going to enjoy and the fans will enjoy because it’s going to really have a different look this year,” said Young. “We are on schedule for the home opener on the 29th, the ice will be ready.”

Kowalchuk added he personally helped revamp the club’s dressing room for the upcoming season as well, which focuses on celebrating the team’s 46 seasons of history.

“We have a junior A dressing room now. I want the guys to feel that importance and see the rich history,” he said. “There’s just so much that plays into it. It’s special, the guys feel they want to be part of it.”

The Kinplex will be in the spotlight a few times during the season, as the Cubs will also host the HJHL all-star game and top prospects game on Jan. 5.

“We really went after that bid,” said Kowalchuk, adding the top prospects game is a great opportunity to showcase the league’s younger talent. “This league has always been, not a developmental league but a working man’s league. Well, we want it to be bothâ€¦ The league agreed and they voted us in for that game.”

Kowalchuk added the team will be partner with the Hockey Hounds and reaching out to the community for volunteers to help with the tournament, with details to be announced through their website in October.

“We’re in good hands with our committee,” he said. “We’re looking forward to all the volunteers from the Hockey Hounds and we call on support from the city.”

The last time the team hosted a tournament of this calibre was the 2005 Keystone Cup, the western Canadian championship where the Cubs finished third.

Medicine Hat opens the HJHL season Friday in Airdrie against the reigning provincial champion Thunder, and Kowalchuk says he hopes watching their banner rise into the rafters will light a fire under the Cubs for the season to come.

“That’s kind of why I went after that opening night game in Airdrie,” he said. “I wanted them to see that banner to get them excited again to really send a message to the league.”