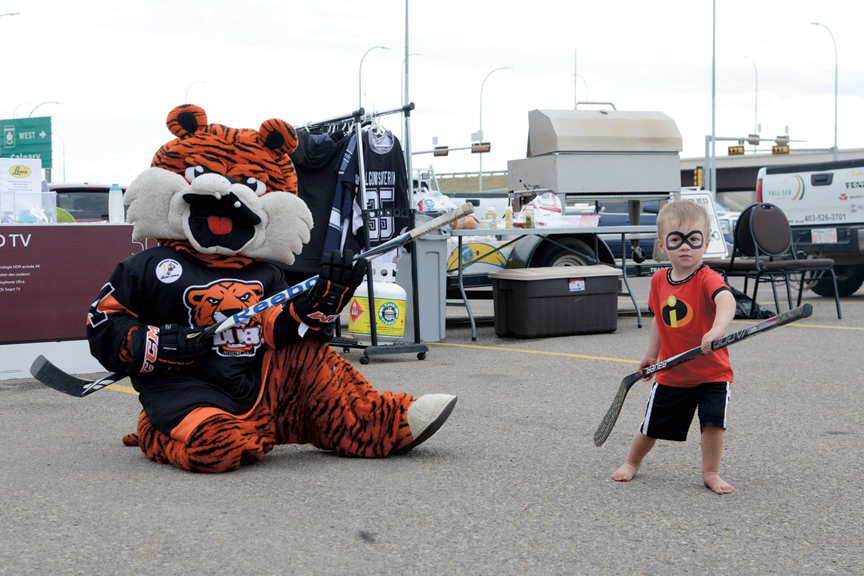 The Medicine Hat Cubs are back in town and ready to build on last season’s success.

While they won’t kick off training camp until Sept. 6, the Cubs got together Saturday to host their second annual ticket blitz and fan fest at Comfort Inn. After recruiting just eight new season ticket holders at last year’s event, the Cubs put together one of their strongest campaigns in recent memory – and the city appears to have taken notice.

“I think it shows today with (100) season tickets sold,” said Cubs general manager Dave Kowalchuk. “It’s been a good response. It helped having a good year last year. The new jersey, the new logo, there’s a good buzz. We’ve got a good core coming back and we’ve signed some good kids so there’s a buzz to have a good year.”

Cubs forward Mackenzie Fritzler says it’s fantastic to see such a significant jump in season ticket sales, as a rocking Kinplex has a tendency to fuel the team on the ice.

“It’s exciting. It’s going to be good,” said Fritzler. “We know the fans are awesome, we have a good fan base and there’s nothing better than that. It’s sure going to pump the boys up and help us have a good season.”

Newly appointed Cubs captain Tavin Stadnicki agreed that expectations are high for the upcoming season, especially with a handful of talented youngsters ready to crack the roster.

“We have a good group of guys. I have some big shoes to fill with (Quinten) Karg leaving but hopefully I’ll manage,” said Stadnicki, adding he can’t wait to build on the success they fostered last season. “I think we opened a lot of eyes last year. We came into playoffs in the fifth spot and swept Strathmore in the first round then took Coaldale to Game 7 in overtime. If we beat Coaldale I think we probably would have been going to the league finals, that’s the way I see it. We expect big things this year.”

Kowalchuk added the Cubs have taken notice of the way the Medicine Hat Mavericks have catered to their fans in recent years. The Cubs have been following that lead by creating events like the ticket blitz, and Kowalchuk says the ‘family-oriented’ atmosphere will extend into the Kinplex as well.

“We’re excited and we hope the fans will show up to our home opener and cheer us on. There will be a lot of excitement and extra things,” said Kowalchuk. “We’ll have a light show and smoke show to start the game, kids are welcome free. We want to make it a family-oriented thing like the Mavericks have done.”

The Cubs are scheduled to host the Lomond Lakers in their home opener on Sept. 29 at 2:45 p.m., though Kowalchuk says the schedule is tentative due to ongoing construction at the Kinplex.